The Art of Hearing Heartbeats is a story of family hardships, betrayal, and love. The moral of this story is that love transcends all bounds, and I highly recommend that you read it to find out why. 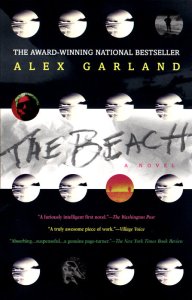 While I enjoyed this book, I guess I was expecting just a little something more…. more drama, more violence, more something, based on how the book was described. The story follows a 20-something man named Richard who has traveled from England to Thailand looking for adventure. Once in Thailand he briefly meets a fellow traveler who leaves Richard a map to an Eden-like beach, before promptly committing suicide. The beach is the subject of a legend among young travelers in Asia, a place that many believe to be real, but with no concrete knowledge of where it is or how to get there. It is described as such by people who have never been there:

“Think about a lagoon, hidden from the sea and passing boats by a high curving wall of rock. Then imagine white sands and coral gardens never damaged by dynamite fishing or trawling nets. Freshwater falls scatter the island, surrounded by jungle. Canopies three levels deep, plants untouched for a thousand years, strangely colored birds and monkeys in the trees. On the white sands, fishing in the coral gardens, a select community of travelers pass the months. They leave if they want to, they return, the beach never changes.”

The reason I say I was expecting more is because the synopsis of the book tells us that Richard indeed finds this idyllic beach but that over time he learns that the beach culture has deadly undercurrents. And while I enjoyed the book, much of it was pretty low key, centered around the beach dwellers life in their hidden oasis and the drama factor does not begin to ramp up until almost the very end. What I did enjoy is how subtly we begin to see Richard’s character change the longer he spends at the beach. Now I’m very curious to watch the movie! 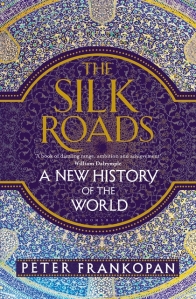 The Silk Roads: A New History of the World attempts to take on the daunting task of re-examining world history focusing on the East. As least, that’s what the title seems to promise. In the introduction, the author critiques Orientalism and attitudes in the Western scholarship that either ignore or downplay the East’s effects on world history. Throughout the first half of the book the author tends to exoticize Eastern people and culture despite pointing this out as an issue in the introduction. Eastern history is also only the focus of the first half of the book and the last half mainly discusses Europe with the East mentioned on occasion, which is not what I expected from the title and blurb. In the audiobook, the narrator also sometimes puts on accents when quoting Eastern sources which I felt wasn’t necessary.